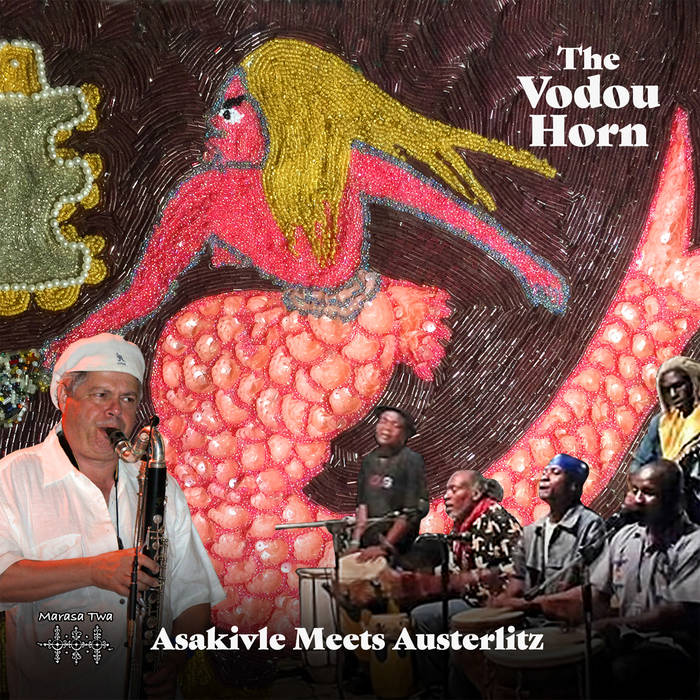 This album is part of a trilogy called Marasa Twa: Vodou-Jazz-Merengue. In the spiritual traditions of Haiti and the Dominican Republic, the Marasa Twa are magical triplets who manifest divine mysteries. The three offerings, The Vodou Horn, Water Prayers, and Dr. Merengue, present jazz fused with music I have studied as an ethnomusicologist.

I am privileged to have spent my life studying world music cultures. At the same time, I have plunged the depths as a musician and as a seeker of life’s meanings. Wedding my artistic and spiritual paths with scholarly research, these albums are the fruit of my sojourn as a musician-scholar. They focus on my principal instrument, the bass clarinet, and on the music and spirituality of Haiti and the Dominican Republic. The trilogy calls upon wisdom generously bestowed upon me by my friends and musical collaborators. I am deeply indebted to, and feel great love for, all those who so warmly welcomed me into their rich worlds of African-based creativity. Considering that these traditions developed as responses to the vicissitudes slavery, colonialism, and neo-colonialism, my involvement in them necessitates prodigious soul-searching. What is my contribution, as a white man, to these music cultures? Unlike conventional research aiming for unbiased reportage, and unlike “world music” projects focused solely on personal expression, my involvement with African-based cultures is motivated by mystical needs, creative needs, and activism. My hope is that these musical offerings will contribute, in some small way, to propagating the transcendent vision that has long fueled the ongoing struggle for social justice from which these traditions emerged.

Franck Desire founded the Asakivle drumming and singing group, which plays traditional ritual rhythms in concert settings. I met them in 2010, and we played together few times over the years. The word Asakivle means that “everyone is welcome.” This is apt, because the band has a warm spirit. I have always loved Haitian music and was elated to encounter a group of drummers and singers with whom I felt such synergy! Franck told me that the symbiotic feeling was mutual, so we decided to make an album. This offering combines traditional Vodou songs with jazz and rock. After recording live in a studio in Haiti, I worked in Brooklyn, NY with recording engineer / bassist Chico Boyer and guitarist Monvelyno to forge the finished product. Chico is a major figure of Haitian music in his own right, and we are fortunate that he joined this journey. Franck recorded three additional tunes with singer Melissa Gresseau.

Haitian religious songs present great wisdom; they constitute a kind of “Bible” of spiritual teachings. Hoping to share the wisdom, Franck and I decided to translate the songs. This proved easier said than done, because Haitian religious songs employ rich metaphors and multiple meanings to such a great extent that rendering them in foreign languages is difficult, and sometimes, impossible. Complicating matters further is the fact that they employ langaj, archaic forms of Haitian Creole consisting of African words that are no longer in use. For this reason, not all the album’s songs are translated. Like all spiritual “texts,” Haitian religious are subject to rich hermeneutics, to varied interpretations. Our English renderings are based on interpretations offered by Franck Desire.
Franck L. Desire
A native of Haiti, Franck Desire was raised and educated in Port-au-Prince. He left Haiti at age nineteen and traveled extensively throughout Europe, the Caribbean, and Puerto Rico. He then moved to the U.S., where he dedicated himself to working with community development programs, for example, assisting Haitian children integrate into the American school system. He also co-founded Exchange of Hope, a program connecting American and Haitian schools. Raised as a Catholic, Mr. Desire embarked on a journey of personal discovery in the ways of life as discovered through the rich traditions of Vodou. He founded Asakivle, a Haitian dance and drumming troupe with members in Haiti and the United States. They perform traditional Haitian roots music in schools and universities, educating people about Vodou. Notably, Asakivle participated in the acclaimed Sacred Arts of Haitian Vodou exhibitions in Chicago, New Orleans, Baltimore and Detroit.
Dr. Paul Austerlitz

Dr. Paul Austerlitz is Coordinator of Jazz and Professor of Music and Africana Studies at the Sunderman Conservatory of Music, Gettysburg College. He combines his creative work as a musician with ethnomusicological research on Afro-Caribbean music. Austerlitz is especially active in blending the music of the Dominican Republic and Haiti with jazz, and in initiatives using music in the struggle for social justice. As an instrumentalist, Austerlitz has dedicated himself to mastering the bass and contrabass clarinets. He also plays Bb (soprano) clarinet, tenor saxophone, and flute. He has performed with musicians such as Ed Blackwell, Doc Cheatham, David Murray, Don Byron, Jimmy Knepper, and Julius Hemphill. Dr. Austerlitz has completed composing residencies at the Yaddo and Omi artist colonies, received grants from the Macoll Johnston Foundation and the American Composers' Forum (among others), and worked with the U.S. Department of State and grassroots community organizations in projects using multi-cultural music to foster social change in the Dominican Republic. Dr. Austerlitz is the author of Jazz Consciousness: Music, Race, and Humanity (2006, Wesleyan University Press), and Merengue: Dominican Music and Dominican Identity (1997, Temple University Press). Jazz Consciousness was awarded the Merriam Award for Outstanding Book in Ethnomusicology by the Society for Ethnomusicology and an Honorable Mention for the Woody Guthrie Award by the International Society for the Study of Popular Music.

Bandcamp Daily  your guide to the world of Bandcamp

Khruangbin and Greg Foat stop by with their amazing new LPs.