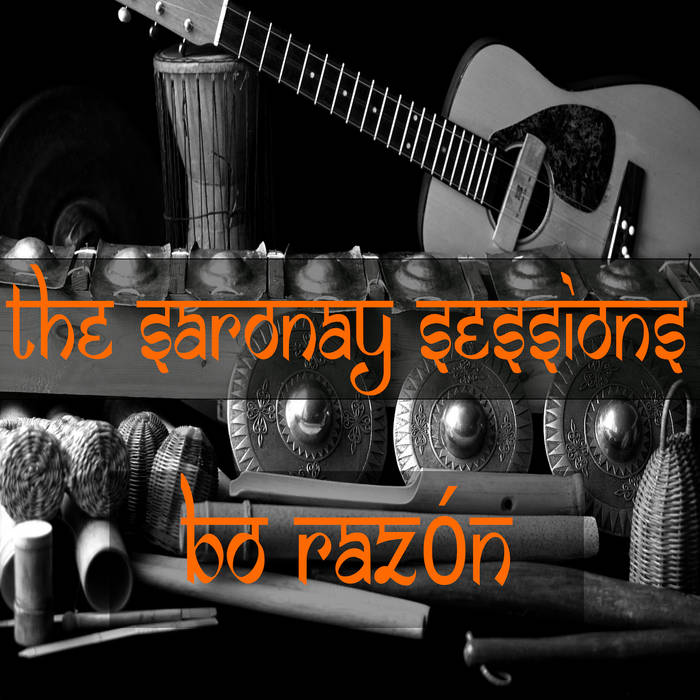 Sahara Mon Amour is a Sinulog Son, a tune with elements of the Sinulog subgenre in Maguindanaoan (southern Philippines) music placed within the rhythmic framework of a Cuban son, while a ‘desert nomad’ melody floats above it all.

Pasyon de la Rumba – during Semana Santa (Holy Week) in the Philippines, epic chants that recount the Passion, Death, & Resurrection of Jesus Christ are recited continuously until Good Friday afternoon. This traditional folk melody is from one of those chants and when I first heard it, I couldn’t get it out of my head and thought that an Afro-Cuban rumba guaguanco might be a good fit for the melody to nest in.
In the Cuban Trés playing the melody & solo, I am paying tribute to Arsenio Rodriguez, the great pioneer of Cuban music who played this instrument.

Binalig al Andalus is an adaptation of a traditional Binalig mode melody in Maguindanaoan music. I wrote the B section to echo Andalusian expressions. The Saronay ‘ mini-gongs’ play the melody along with the Jarana guitar, an instrument used in Son Jarocho music from Veracruz, Mexico. A Brazilian Baiao rhythm plays underneath the interplay.

Fendoyog is a lullaby sung to put children to sleep among the Teduray people in Mindanao in the southern Philippines. I came across this melody in another project years ago and always wanted to play it on the Oud, like you hear here. It is framed by Lucumi Bata drum rhythms to Obatala. The idea conveyed is that of the arc of human existence, from cradle to old age.

And the River Flows On – is a tribute to the late Danongan Kalanduyan, a master artist of his native Maguindanaoan culture, who was instrumental in the spread and propagation of Kulintang gong music in North America. I wrote the melody around a traditional Sinulog song and its interlocking parts. The Middle Eastern oud and the Maguindanao kulintang gongs take respective solos here; the traditional dabakan drum is heard here as well. The river of life, culture, and art flows on as our elders pass on the knowledge to the younger generation in a continuous cycle.

Afroyesa Maranao – Using Iyesa bell patterns as a base, this tune builds into an Afrobeat-ish funk groove by the time the kulintang melody, from the Maranao Kadsagurongan, comes in. After the middle dub section, Congolese guitars layer in as a bed for the Fender Strat solo.

Bo Razón is primarily a multi-instrumentalist, composer, and recording artist. He is also a writer, a video director and producer, and an educator. Fascinated by and immersed in traditional music of indigenous world cultures and by contemporary music genres, Bo seeks ways in which the two may coalesce organically. His skill sets have brought him to work with several global institutions of art and culture such as the British Council, the Goethe Institute, the Alliance Francaise (Paris), Instituto Cervantes (Spain), and the Philippine National Commission for Culture & the Arts (Manila). He plays many instruments, primarily strings and skins, from diverse global cultures and has performed in settings and venues in Asia, Europe, and the Americas.

Born in the Philippines with Malay, Polynesian, Cuban, Portuguese, & Irish strains coursing through his DNA, Bo was exposed to music at an early age as his parents both came from musical families and played instruments themselves. He first picked up the guitar as a pre-teen in Manila, then moved to Baltimore where he honed his Blues chops, diving headlong into Rock shortly thereafter. His move to San Francisco after high school exposed him to Jazz and Latin music. While in the Bay Area, he immersed himself in the Cuban, Brazilian, & Caribbean music scenes playing in different groups concurrently. A Bay Area resident for many years, Bo was fortunate enough to perform with legendary Cubans artists Francisco Aguabella and Armando Peraza, as well as Cuban son group Conjunto Cespedes. He was part of the flowering Mission District music scene, playing with the likes of John Santos, Michael Spiro, Rebeca Mauleon, Karl Perazzo, to name a few. He also played in the Pachanga Pistols, a pioneering Latin funk group founded by Greg Landau, who introduced Bo to the Cuban Trés guitar. As a core member of San Francisco’s premiere Worldbeat band, Big City, Bo headlined at Berkley’s Greek Theater, the Kabuki, Wolfgang, the I-Beam, and the Great American Music Hall, sharing the stage with a spectrum of notable artists such as Herbie Hancock, Red Hot Chili Peppers, Ornette Coleman, X, Fishbone, Primus, Nona Hendryx, General Public, and many more. He has also performed at the prestigious Walt Disney Concert Hall in Los Angeles, the Asia Society Concert Theatre in New York, and at the Smithsonian Institution’s Folklife Festival in Washington D.C. In addition, Bo has played in world music festivals in Barcelona and Madrid, and in jazz festivals in San Jose and Hollywood, California.

Discovering his paternal great-grandmother was from Havana, Bo headed to Cuba in the 1990’s to immerse in the music and folklore of the island. He attended Master Classes and Workshops on Cuban music at the National School for the Arts in Havana and conducted field research on Afro-Cuban folklore and music under the auspices of the Anthropological Society of Cuba in Matanzas, the repository of African culture in Cuba. Bo has also performed and collaborated with master musicians and cultural artists from Jamaica, Cuba, Brazil, the Philippines, India, Nepal, Trinidad-Tobago, Nigeria, Sierra Leone and other African and Caribbean countries.

In the intervening years, Bo has immersed himself in the music of the gong cultures of Mindanao in the southern Philippines, apprenticing under master musician Danongan Kalanduyan from Mindanao. Moreover, he has been continuously engaged in the Afro-Caribbean musical spectrum, in the musical mother lode of West Africa, in the rich diversity of Brazilian music, in Iberian musical expressions, in electronic and experimental formats, and in more North American Blues and Jazz. It is within this rich and varied background that Bo Razón brings us his recent compositions and adaptations of traditional indigenous music through this EP release, “The Saronay Sessions” - a world music blend combining elements from cultures in four continents.

Bandcamp Daily  your guide to the world of Bandcamp

Khruangbin and Greg Foat stop by with their amazing new LPs.